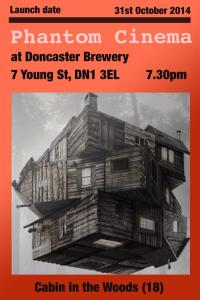 The cabin’s owners somehow got round the local planning laws…

Note: This is the first in a series of blogs about local entertainment and other cultural events which are happening in and around Doncaster, which I’m calling “Arty Donny“.

I recently rounded up Jon Kelly, Donald Lownes-Sanderson, and Paul Bareham to talk about “Phantom Cinema”, which makes its debut on Friday, 31 October:

Q: So tell me about “Phantom Cinema”. First, why “Phantom”? Are you planning to show only scary films?

No, not at all. The Phantom part is about operating on the fringes, and only appearing once a month. We will be showing horror, sci fi, action, drama, musicals, westerns, crime films: whatever we think is good and would like our audience to see.

Q: Who’s involved, and what brought you together?

Jon Kelly, Donald Lownes-Sanderson and Paul Bareham are the main protagonists, although Ian Blaylock at Doncaster Brewery is hugely important, the fourth Musketeer. We met at the Showroom Cinema in Sheffield and decided that it was time that there was a place in Doncaster to watch and discuss interesting and unusual films, and Phantom Cinema is the result.

We’re not trying to compete with Vue: we’re not offering the same thing. A town with one cinema is like a town with one horse: where’s the choice?

Q: Your first film is “Cabin in the Woods”. Why did you choose that particular film?

As we’ll be opening our doors on 31st October, it seemed appropriate to kick off with a horror film, but ‘Cabin In The Woods’ also embodies what we hope Phantom Cinema will come to represent: it’s smart, it’s different, it’s entertaining – and it doesn’t do what you expect it to.

Q: I understand you’re showing “Fahrenheit 451” later this year. Something tells me that “The Sound of Music” isn’t turning up at “Phantom Cinema” any time soon.

You can turn your telly on almost any day of the week and find ‘The Sound Of Music’ somewhere, so you don’t need Phantom Cinema for that (we’re not against it, by the way: one of us has ‘My Favourite Things’ as his ring tone). ‘Fahrenheit 451’ is a fascinating film by a great director, adapted from a critically acclaimed and best-selling book, and with a star cast. It’s not a difficult or obscure film, in fact, it’s a bit of a masterpiece, and we want people to see it.

Q: You’re going to be showing your films at Doncaster Brewery Tap. Isn’t that a pub? And will someone be stood down front during the interval with a tray full of pints?

A full range of beverages will be available. You get your own drinks. You’re in for a treat.

Q: My husband doesn’t like going to the cinema any more because the other punters make too much noise. What’s your policy on mobile phones, noisy sweetie wrappers, and – worst of all – people who chat to their friends about what’s going to happen next?

We don’t expect that there will be anyone there who doesn’t have a healthy respect for the films we are going to show, and that includes respecting the atmosphere and other patrons. It’s a relatively small space, so it will be exceptionally embarrassing if we have to eject you!

Q: I’m sold. So what’s the bottom line on tickets: how much, and how do I get some?

Demand for tickets has been high ever since we announced our Halloween launch in mid-September. Our screening of ‘Cabin in the Woods’ sold out in two weeks, although there may be extra seats available on the night. We have a schedule of films for the next few months on our website at www.phantomcinema.co.uk where you can also buy tickets and find out about our membership schemes.

Members are guaranteed entry into any film by paying a very reasonable subscription fee upfront. This also helps us greatly when securing licences for the future. Standard tickets are £3.50 when bought in advance. If we have remaining places left on the night entry on the door is £4.50.

Enough about me. Art by Tom Brown.
View all posts by Sheila N →
This entry was posted in Art, Arty Donny and tagged cinema, culture, Doncaster. Bookmark the permalink.