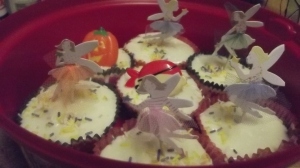 Who let that pumpkin in? Who? Who?

Every family – however big, however small – has its own secret language. One known, and amusing, only to themselves.

Even the little nuclear family of my husband, Gerald C Dalek, Arthur C Rat, Mr Fish and I have our own private stock of words and phrases which make sense only to us, and which makes no one else smile. (1) For example, when choosing a fresh towel from the airing cupboard, he sometimes says: “I’ll have the black one. Because my soul is black.” Only we know that the second sentence is a quote from the then-teenaged daughter of a former acquaintance.

Some of our stock phrases originate from the telly, including the late, lamented “Spitting Image”. “Spit”, as an old colleague of mine somewhat disconcertingly used to call it, was full of useful expressions, phrases, and songs, of which “The Chicken Song” is the best known.

Another couple we knew liked to use the phrase “Vanished … like an old oak table”, which is from one of the first “Blackadder” series. Then there’s my favourite, “Doctor Who”, which has jelly baby bags worth of useful expressions, both from so-called “Classic Who“, and “Nu Who“, as the current series is sometimes called.

Then there’s what I’m calling “the accidents of accent”. My meandering Michigan-Yorkshire accent means there are certain sounds I took years to learn: aka, “ooo”, as in duke, tulip, Dewsbury, etc. I still say “book” rather than “booook”, although in the case of my monthly radio show, “Book It!“, some have said it sounds as if I were saying “Bucket!” (2)

Which brings me to the photo above. Some writer friends came round, shortly before Halloween. I baked buns (4). Specifically, “faery” or “fairy” cakes.

Or, as I seem doomed to say, “ferry cakes”. You know, the kind you put in your snap tin for those long, cross-channel journeys.

I think it’s a MidWestern thing. It also means that unless I concentrate, I cannot differentiate between “Mary”, “marry”, or “merry”.

There are, it seems, certain British or indeed Yorkshire sounds I may never manage. Perhaps it’s genetic. My Romanian grandmother, Mama Buna, lived in America for over a lifetime, yet still said things like “lukey-warm” instead of “lukewarm”. She and Mosu both had accents so thick, you could marinate stuffed cabbage in them.

Ah, well. The buns were tasty. And the ferries danced beautifully.

They’ll always be “beetlepoppers” to me. 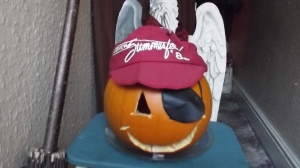 (1) Except Gerald, of course. Gerald never smiles. He’s not so good with the washing up, either.

(2) That’s right: it’s a programme about books, writing, and the relative merits of your basic red plastic bucket, versus a grey one with the thingy in it to wring out mops. (3)

(4) That’s “buns”, with an emphasis on the “uuu” sound. If you call them “cupcakes”, you can’t offer them to visitors, then say “You’re not bun to have one.”

5 Responses to Beetlepoppers and Ferry Cakes