The Joy of Creatures 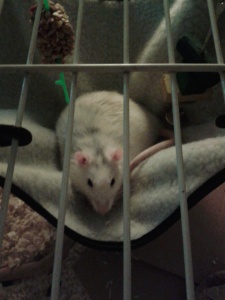 I am writing this blog with a head full of bird seed, and cardboard. Not literally, I’m pleased to add.

Whilst I’m mainly thinking about what I want to say about pet ownership, part of me is also wondering:

1) Does Arthur C. Rat need more cardboard? Do I have enough of the right kind of cardboard? (1)

2) Is there sufficient daylight yet for me to put fat balls and mealworms out for the birds, without tripping over myself?

My ratty friend takes his full name from Arthur C. Clarke. Who, being dead, is probably not that bothered. I had wanted to name my pet James, after two of my favourite authors: James Hilton, and James Thurber. It changed to Arthur C. when I decided it might make for better relations between him, and Gerald C. Dalek. Who isn’t a pet.

But, enough about my complicated family relationships. What, oh gentle and persistent reader, about the pets? Some may also wonder: why does this blog have a mental health tag? 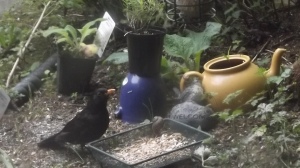 Question: What is the most common reason for someone to leave a psychiatric ward without letting staff know, then reappear on the ward later that same day?

It’s to check on their pet(s).

Most of us know of an elderly person who is kept going by the dog, cat, or bird who depends on them for food, shelter, poop scooping, and, most of all, love.

What about someone who’s struggling with depression, anxiety, a mood disorder such as my own bipolar one, etc? A pet or pets can be a vital part of what keeps us going through challenging times. Of what keeps us wanting to keep going.

Families and friends can be, and often are, great. But they don’t have that same sort of unquestioning love. The sort that confines its questions to simple ones, such as: “Where’s my dinner?” or “Isn’t it time you cleaned the cat tray?”

In my experience at least, pets don’t ask: “Why are you so upset about that?” let alone: “Why don’t you just snap out of it?” or the dreaded “How are you?”

I was a cat owner, or co-owner, from the age of six. That’s when my mother decided I was responsible enough for the family to get the cat I’d been wanting for years. (4) Growing up, I terrified Mom by kissing the neighbour’s beagle, Penny. Mom, meanwhile, discovered that she was a Cat Lady at heart … in her case, the kind who restricts herself to one cat at a time.

That cat, a Russian Blue lookalike whose temper was soured by meeting 6-year-old me, turned out to be the first in a long line of felines who have graced my life, and destroyed my soft furnishings. Whilst I have never been the sort to refer to my pets as “fur babies”, I do think kids and pets have at least this in common: you shouldn’t have either if you’re the sort of person who insists on a pristine home.

Kids or cats, dogs or daughters, you’re guaranteed some barf in your life.

And why the bird photo, and the reference to meal worms? After our last cat died, and before the appearance of Arthur, the garden birds were my “substitute cat”. In truth, I had already been feeding, and watching, them for some years by then.

Arthur, my cats, and the birds alike have all brought joy to my life. Mindless chat with Arthur is fun and refreshing after a hard day: whether it’s due to a difficult shift, family worries, or a bad spate in my up-and-down struggles with my mental health.

Animals have also inspired me as a writer. They add a strange, furry grist to the mill of stories which help me through the day, and this sometimes too-interesting life. Creatures, real and mythical, have left their paw, claw and hoof marks on many of the tales featured in the short story collection which is due out soon.

Here’s to the creatures: bless them all! 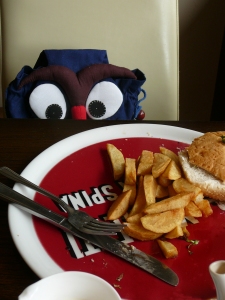 Real or imaginary, he does look hungry

(3) The sort of lad who would probably destroy all of Doncaster Met Borough, should we ask him to pick up his socks. Fortunately, Daleks don’t tend to go for footwear.

2 Responses to The Joy of Creatures