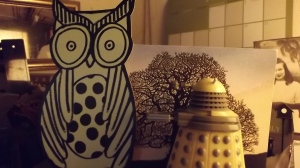 “Faith is not for dealing with God’s grandeur – the sunset, the candle flame, the child’s face … Faith is rather for the hours of God’s absence, when we are most alone, betrayed, in pain, afraid.”- Thomas Lynch, “Booking Passage: We Irish and Americans”.

Can you feel nostalgic for a faith that you haven’t really believed for over 40 years? Can the God of childhood tug at you, when that seemingly distant and often bad-tempered God singular has been replaced by the even more detached gods plural of Nature?

As I write this, I’m listening to Simon and Garfunckel’s 1981 Concert in Central Park. Paul and Artie just sang:

This is not a line I expected to resonate with me, when I was growing up in a Downriver suburb of Detroit, all those years ago.

I tried writing another blog, a few days ago, about the things on my desk. Only to catch sight of this photo:

…. and promptly burst into tears.

Does grief, like our childhood faith, never leave us? Are there things in our lives which, no matter how much we believe – or unbelieve – we are better off accepting? Taken as permanent givens in our aging – sometimes, raging – lives?

When I started working in mental health, I thought the most useful thing, I could bring to my job was my experience of being bipolar. Of having been in and out of mental services for five – now coming up to over 10 – years. Of having been miserable, and bored, in psychiatric “care” three – now, four – times.

Of knowing what it’s like to experience what Tom Lynch calls “the hours of God’s absence“: often – but by no means always – the hours between 2 and 5 am.

I started this blog wanting to talk about my desire for “peace like a river”. The older I am, the more I crave what the churches and preachers of my childhood called “reconciliation”. Whilst they were concerned with the reconciling of God and (wo)Man, I concern myself more with the reconciling of human and human; mankind, and Nature.

As I tussle with WordPress, my computer, and myself in my attempts to write this, the world is being treated to more pictures of Pluto. Who beside Nasa, and a few other dreamers, would have thought that in the Year of Various Lords 2015 we would see such a thing?

I hope, as well as aiding what I see as Mankind’s inevitable trip to the stars, these photos reinforce how tiny we are compared to the universe. That they inspire us to come together, as only family can, in times not only of despair, but of wonder, and great joy.

“Love is what you’ve been through with somebody” – James Thurber