Tentacles Spotted in the Midwest!

A Yorkshireman in Ohio

A man sat on a quiet bench in the small, fashionable suburb of Shaker’s Depths, a few miles outside the state capital. A long, thin, green something was twisted around his neck, like a scarf.

It wasn’t a scarf. It glistened and glooped in a faintly unpleasant way in the soon-to-be-heat of an early July morning. Probably because the man looked asleep, he wouldn’t be found for several hours, and in fact was quite dead.

From violence, not boredom, despite the fact he was in Ohio. 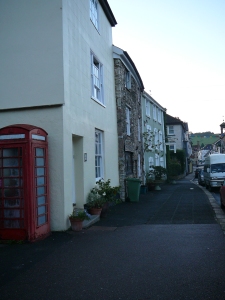 Slowing his rental car to an Ohio crawl, Inspector Thwaite pressed the window controls, and let a blast of hot Midwest air into the air conditioned chill.

“Welcome to Sweetheart Springs.” Thwaite’s colleague, Jake, who was sitting on the passenger seat, read the sign aloud. “Twinned with Doncaster, England. Pop: 4,800. You’ll like it here! Fine for littering $5000 max.”

Jake swiped his tongue across one paw, then said, “Littering? As in – ?”

“Not your sort of litter, Sgt Cat,” the inspector replied. “Although I understand that the town has limits on the number of pets which people can own.”

“Ownership! Pets! Limits! So much wrong, so little time!” 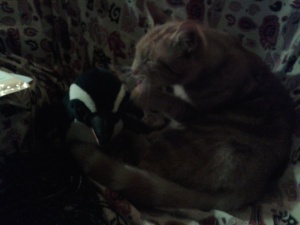 Jake’s ears were flat against his furry head, and there was spit on his whiskers. Which was unusual, as he had stopped washing his face.

“We’re in Ohio, now,” the Inspector reminded his sergeant, as he steered the silver Kia Rio in the direction of the nearest parking space. “They speak American, not English, or Feline. They mean rubbish.”

“Like that leaflet about local church services which you found in the glove box, and put in the bin?” Jacob asked.

Jake jumped off the passenger seat, and onto the tarmac, copper eyes widening at the heat beneath his paws, and leaving Thwaite to park the car, and get his suitcases from the Kia’s boot. Cats don’t bother much with luggage.

“Putting things in the bin isn’t littering, Sgt Cat,” Thwaite said, as he locked the car, then put down his bags, and gazed at the quiet, tidy streets of downtown Sweetheart Springs.

Jake blinked as he gazed up at the plentiful trees, and bright blue sky, eyes blissful in the morning sun. An American flag flapped gently from a flagpole high over both their heads.

“Looks fairly green to me, sir.”

“Not dry, as in desert, Jake. Dry, as in alcohol. Where are the Bird, and the Tap, when I need them? Or the Masons’?”

Jake knew the Inspector wasn’t talking about his, Jake’s, kind of bird, but the Bird and Baby, the Inspector’s favourite Doncaster pub, whilst the Tap and the Masons’ were the Doncaster Brewery & Tap, and Masons’ Arms.

“Does that mean you won’t be able to go into the pub – sorry, bar – with me, Sgt? You know I don’t like drinking alone.”

Jake, who was eight, thought to himself that it wasn’t the drinking which his inspector didn’t like to do by himself, it was paying for it. Thwaite’s tab at the Bird and Baby was the stuff of Doncaster legend, whilst his habit of having people buy him rounds at the Tap, and never paying for one himself, was as notorious as the Aardvark Record Shop across the road.

If you enjoyed this story, and would like to read the rest of it, please purchase (1) one or both of my short story collections, “What! No Pudding?” and “Koi Carpe Diem”.

To listen to local authors including myself read from our books, visit the Doncaster Brewery & Tap on Thursday 26th November from 19:30. I’ll be selling print copies of “Koi Carpe”, featuring cover art and four additional drawings (2), by artist Tom Brown.

2 Responses to Tentacles Spotted in the Midwest!