Travels with a Tomato: the London Edition

Tom borrows my sweatshirt for a better view

This the start of an occasional series about my travels with a tomato. I tell you this in case you’re either 1) the sort who skips titles, and heads straight to the blog, or 2) for some reason, you don’t enjoy reading about people who travel on public transport, taking pictures of crocheted tomatoes.

I love London. I love the public art, the museums, the history, the river, the mix of people from all over the world. In my ideal world, I would visit there for regular weekends and weeks, preferably paid by a publisher who understands my need to get away from my adoring public, and travel about this great city, seeking relaxation and inspiration.

Note the word “visit”. I have no desire to live in Da Big Smoke. Too noisy, too crowded. Too – here I display my transplanted Yorkshire roots – southern.

It’s a great place to take photos, though. And to walk, as well as use the excellent – if at times packed – public transport. Earlier this week, I walked from Albert Embankment to here: 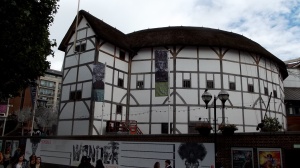 I was tired by the time I got there, yet proud too for having walked so far: probably my longest continuous walk since surgery four weeks earlier. It wasn’t 500 miles, though it felt like it, at times.

Plus, Shakespeare! We’re talking about the flippin’ Globe, for crying out loud!

Of course I hit the gift shop, though not nearly as hard as I would have liked to, having flexed my magic money card earlier that week, ordering copies of “Koi Carpe Diem” for yesterday’s “Turn the Page” literature festival here in Donny.

I also promised myself that someday, I’ll return with plenty of time to see a play.

Outside looking in: the gates at The Globe, London

What of Tom the tomato, or to give his full name, Tom Gardeners-Delight? He’s the main character in a short story titled “Train that Fruit!” which features in my collection “A Yorkshireman in Ohio,” due out next month. “Train that Fruit!” is an imaginary game show in which a piece of fruit tries to travel from one railway station in Britain to another, without coming a cropper.

The real Tom (1) was crocheted by an extremely talented lady who also gave me an Oreo cookie she’d made earlier. Naturally enough, when I visited London for work, I took Tom with me. Both he, and a Tube passenger who happened to sit opposite us, were puzzled, though for different reasons.

Who can blame him? Tube maps can be quite confusing.

Did I mention how much I love London? Crowded, puzzling, but gods it can be gorgeous. Plus, the buskers are out of this world. 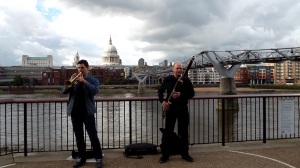 Buskers near the Globe – and the Thames.

I love too all the hidden art and wonders that London hides under her huge and sometimes dirty skirts. Such as this little gem I spotted in an underpass on the way to The Globe:

London is a colourful and odd place, which is perhaps why it appeals to me so much, as a definitely odd, debatabley colourful individual.

It helps that London’s full of public art, which is one of my passions. Here’s a statue I found along the South Bank.

My trip to London last week, and yesterday’s “Turn the Page” festival, were both welcome distractions from a fortnight which has been clouded by my bipolar, worries about what happens next in my cancer treatment plan (2), work, and the death of someone I cared about. In very different ways, London and the festival helped me get through a difficult time.

So has travelling with Tom, who doesn’t appear in as many photos as I would have liked, as I didn’t want him taking an ill-advised dip in the Thames.

We can make a beautiful city: London, June 2016

How can I not love a city where I can come across things as unexpected as this? 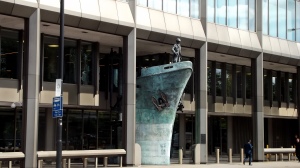 Walking along the Thames was brilliant. The river may be a bit tired, and dirty, but the views and the cityscape were wonderful. Thanks to all the tourists, I also heard more American accents in one afternoon than I hear in a year in Doncaster. 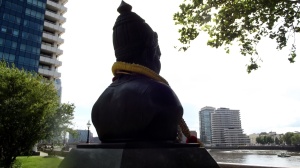 Like the decorative tiles shown earlier in this blog, the statue pictured above was an unexpected – if much more public – find. It depicts Basaveshwara (1134 – 1168) , who among other things said “Work is worship.” I’ll leave you with another view of him, and a wish for a lovely, restful Sunday.