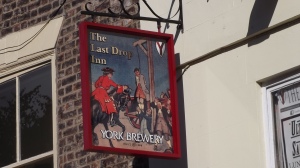 Part 2 of some Sunday fiction for you, from my alternative version of Doncaster; click here for Part 1

“Elizabeth’s taken in a cat?” Harry interrupted. “George hates animals, always has, ever since the school guinea pig bit him, when we were six.”

“I think she got it just to piss off Dad. It’s only thing she’s ever done to stand up to him – that, and give our Betty some money so she could marry Peter.”

Harry looked at Gary Sanders, then at his mate Tim. Then the landlord took a clean glass from under the bar, and filled it from a pump that said ‘Sentient Stoat’, and had a picture of a brown, furry creature with a fag hanging from its mouth. Harry didn’t say anything as he placed the pint glass in front of Gary. The latter’s face was a puzzle.

“No bullets. If someone shoots you, or your dad, it won’t be me. I don’t like guns. I prefer using sturdy Russian novels, or the collected works of Conan-Doyle.”

Downing his pint, Gary noticed the collection of hard backed books which stood on the shelf above the bar.

“But what if someone gets to the complete Shakespeare before you?” he asked.

Tim pointed to a yellow rucksack, which was sitting on the bar next to him.

“Three notebooks, a pencil case full of pens, the collected works of Rudyard Kipling, and a hardback of ‘The Count of Monte Cristo’. Enough wallop to make a powerful impression on almost anyone.”

“Thanks. But think on what I said: you may be the image of your dad,” Tim paused, as he took in Gary’s receding, close-cut hair; and his short, stocky body, “but you don’t have to be him. My eldest, for example, prefers the prose of Tolkein to his poetry, and drinks dry white wine. Never had a single drop of beer, our Terry.”

“Hard to imagine,” said Gary, as a smile twitched at the corners of his mouth. “Although JRR’s prose is quite poetic at times.”

Harry grinned. He poured another pint of Stoat, and passed it to Gary.

“So leave your car,” said Tim.

Gary hesitated. As he did, Harry passed him a whiskey chaser.

Gary drank the beer in three quick gulps, then threw back the chaser.

“Careful,” said Tim, and, “Another … please,” said Gary, putting a tenner on the bar.

“Thanks,” said Harry, putting another pint, and chaser, on the bar. “Drink the Stoat stout more slowly this time, though, lad.”

“You could leave it all,” said Tim.

He began to laugh, then giggle, then sob. Eventually Gary’s sobs turned into an extended swear fest that could have turned the sky – now black, and studded with stars – blue again. 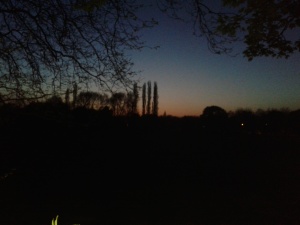 This time, when the cat landed on the bar next to him, Gary barely flinched, though he did stop swearing.

“Everything all right, Jake?” Harry asked.

The cat unflattened his ears., but didn’t stop lashing his tail.

“It is now,” said Jake, as he glared at Gary in the way only a cat can glare. “I could sue you for damage to my ear drums.”

“Sorrry,” Gary mumbled into his pint.

“Oh and the inspector said to say that if you need any help, I can bite him whilst Tim here holds him down.”

Jake turned back to Gary, and smiled a smile which showed virtually all his teeth. “Unless you need him arresting, in which case I’ll go get the inspector.”

A face only cat lovers could love

“I don’t think that will be necessary,” Harry the landlord said. “But thanks for the offer.”

Tim looked across the tap room toward the small table which held an empty bowl of milk, and two whiskey tumblers.

“Where is Thwaite?” he asked, referring to cat sergeant’s superior officer.

“Janice rang, so he made his excuses, and left,” the cat replied, referring to Thwaite’s girlfriend. “He’s not gone far, yet. I’m sorry I can’t clear the table, Harry,” Jake added.

“We’re off to Ohio in the morning. Sweetheart Springs police want to talk to us both about feline integration and the Donny constabulary.”

“Different,” Tim commented. “Let us know what the beer’s like.”

The cat made his goodbyes, jumped down from the bar, and went out the door of the “Bird & Baby”. His black and white tail was still twitching slightly.

Once the cat had gone, Harry turned back to Gary.

“Do you love her?” Harry asked, referring to the latter’s fiancee.

Gary smiled, slowly drank his pint, and chaser, then said, “She calls me tubby in front of her mates, and only says please when she wants me to do something for her, or give her something.”

Gary laughed. It was sound lacking in humour. He finished his third pint, and put £20 in the Firefly tin, then said, “She’s rich, or will be someday. Soon, at the rate ‘er dad chain smokes. He – her dad – has a chain of electrical shops. My dad fancies a merger: his shops, her dad’s shops.”

Gary looked down at his shot glass, and said, “It’s like I’m some kind of bull, and my father found me a prize cow to go out to stud with. For the sake of a dozen bloody electrical stores, and a few thousand quid. Oh for – “

Gary hiccuped. “Maybe I should have eaten my tea, instead of drinking it.”

Part 3 of 3 will be published on this blog next Sunday, 20th August. If you enjoyed this story, please buy an e-book of “Koi Carpe Diem: Five Tales of Paws, Claws, and Mystery”, featuring Inspector Thwaite and Sgt. Jake, or contact me for a signed paperback, featuring artwork by Tom Brown. For more on Jake and Thwaite’s adventures in Ohio, click here.